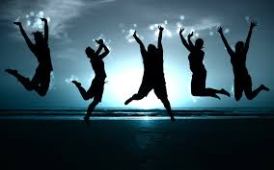 “I want someone who makes me happy.”  How many times have we either heard that or said it ourselves?  So what that basically means is that you’re not already happy, right? If that’s the truth, then you’ve got a lot of work to do!  When did we start giving other people that kind of power and control over our happiness? And another equally important question: Is it fair to put that kind of responsibility on someone else?

If you’ve decided that your life won’t be happy until you’ve met that special someone, then you’ve got a bigger problem than a lack of perceived happiness. You need to take a dating or romantic sabbatical and think about a few things. Suppose you do meet someone who you want to be with romantically. The feeling is mutual and you two begin a relationship. All is well in your world because he/she is “making you happy.” The roses are now blooming and the birds are singing and love is in the air. Great!  But then, for whatever reason, things go south and turn sour. Suddenly now you’re arguing and he/she is becoming distant and less available. Or, even worse, he/she just disappears altogether. It happens all the time in relationships. Now what do you do? This person who has made you so “happy” has now left the building and is out of your life and along with that, he/she has taken your “happiness” with them.

Are you going to fall apart and go back to that gloomy, dismal unhappy place where he/she met you at? Probably so. And that is the entire point of this post. Here’s the thing: If you were already in a happy, peaceful place when he/she met you, you would already know what that feels like. You would already have had a life before they came along and there would be no gloomy or dismal place to return to.

I’m not at all suggesting that you will not feel heartache, sorrow, lost and disappointment – and to what degree depends on how long you two were involved. Those are human emotions and they will surface. That’s not the problem. The question is how will you deal with those feelings? Will you isolate yourself and become a victim filled with self pity and doubt? No one will want to be around you if you do that. And that’s okay if you chose that route – you’re entitled to your feelings, but know this: if you waddle in that perpetual zone of Woe is Me, you’ll be there by yourself. Friends and family will comfort you but for so long before they start getting sick of hearing about it. If you’re the type of person who I’ve described earlier, then chances are they’ve been sick of you long before now because you were always droning on about not being happy or you can’t find someone to love you. Listen up! Get to happy on your own and LOVE YOURSELF FIRST!

Hoping to meet someone who enhances your life is very different from someone who is responsible for it. You’re an adult and you’re responsible for you and your own happiness. When we give other people that much control over our lives and our ability to be happy, we have opened up Pandora’s box and there’s only going to be trouble in the end. Life isn’t fair and sometimes it’s really tough. Bad things happen to good people all the time and things don’t always work out the way we want them to. But if you’ve already decided that life is worth living to the fullest despite the unfairness and that creating your own happiness is a priority for you, then you’ve set yourself up for success. If someone comes into your life and you’re already living it as though there’s no tomorrow, then if/when they leave you, they can’t take something from you that they never gave you in the first place. You’ll miss him/her, but you’ll know how to move on and stay engaged in the life that you already know – the one you’ve created from scratch for yourself before you met them.

Think of the enormous weight that we’d put on another person to make us happy. That’s a full-time job which leaves that other person exhausted, depleted and always walking on eggshells. I wouldn’t want the job! I do, however, want the honor of someone wanting me in their already happy life to add to it. I want someone who wants to double my joy or have me double theirs. I would never want to be the sole provider for someone’s happiness. That’s just too much work.

Happiness is attractive and it is a magnet for more happiness. It is a gravitational force which invites positive energy and goodness into your life. You shine even on a bad hair day, or when you’re just  rocking your bummy sweats and sneakers. Happiness is not worn on the outside like a coat. Instead, it’s like an invisible crown or tiara that you wear on top of your head that screams, “I’M OKAY WITH ME, SO YOU’D BETTER BE, TOO, OR KEEP IT MOVING!”

Like the old folks used to say, “Don’t put all your eggs in one basket.”  There’s a lot of truth in that. I would add by saying “Don’t put all of our eggs in someone else’s basket, put them all in yours and be selective about who you share your eggs with!”  Get to happy on your own – find the way – it’s a fantastic place to live!